Spotify has teamed up with J.Walter Thompson Brazil in developing an algorithm that makes exclusive recipes for every one of Spotify’s 44 million songs. ‘Flavor of Songs’ a campaign for Brazilian cookware brand Tramontina, aims to open people’s eyes to the sensory potential of cooking.

Any link between music and food may perhaps seem too vague or ephemeral to be effetively calibrated into a data system, but their connection is made clear under the principle of synesthesia. Synesthesia is the phenomenon when the stimulation of one sensory or cognitive pathway involuntarily activates another sensory or cognitive pathway. In other words, sound can inform taste, and articulating this perception was the basis for this project. 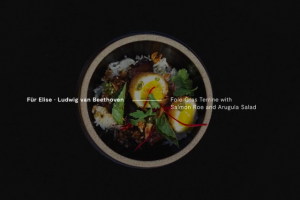 Over the course of 6 months, expertise and insight was drawn from numerous fields to craft the program. Neuroscientist Dr. Marcelo Costa and music conductor Jaoa Rocha laid the groundwork by dissecting the Spotfiy database and investigating the criteria it uses to categorise songs. Elements that could correspond with parameters at play in the formulation of recipes were then determined, and cuisine chef Renato Carioni was tasked with deciding what these culinary parameters would be. Each ingredient was catalogued with exacting precision, thus equipping the AI technology with the necessary tools to make coherent recipes when correlating with songs.

As singular an achievement the ‘Flavor of songs’ platform is, the actual technology underpinning the algorithm is not new but routinely used within financial markets for data analysis. In the words of chief technology officer Paulo Henrique, “we used financial analysis as a basis and turned it into a whole new thing.”