Ellen DeGeneres is coming to Spotify

Spotify has announced its latest promotional partnership with actress and comedian, Ellen DeGeneres. 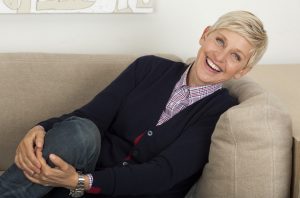 DeGeneres has made big waves in the stand-up landscape and is known as one of the most successful comics of her time, so, it’s safe to say that teaming up with Ellen is pretty special.

What makes this partnership doubly exciting is that it’s Spotify’s first digital content deal of its kind. The streaming giants have given Ellen the floor so to speak, allowing her to develop and curate her very own content hub.

The dynamite host is known to sing and dance to a song or two on her daytime show and this has become a key feature on ‘Ellen’. In an FAQ on her new Spotify page, Ellen said “I’m so excited to partner with Spotify on my very own music hub because music truly makes everything better… Well, music and salt.”

According to Spotify Chief Creative Officer Dawn Ostroff, “Ellen supports what she’s passionate about by sharing it with her… audience particularly when it comes to her love of music.” By teaming up with Spotify, DeGeneres now has acquired a new platform to showcase her passions, “which is why Ostroff believes this “new partnership is such a great fit.”  She’ll be curating a variety of playlists, podcasts, and video clips and in return will make on-air plugs for Spotify during her eponymous TV show.

Ellen Show Executive producer Ed Glavin said, “It’s long been important for us to engage audiences everywhere, across all platforms.” “The opportunity to build out a first-ever Ellen [Show] hub on Spotify provides another way to allow millions of fans to connect with Ellen and get an inside look into her love of music.”