Podcasting may have started off as an off-beat small scale medium, but has become a truly mainstream proposition in recent years. Mammoth media entities have begun laying groundwork to fully incorporate podcasts under their future remit, with two recent examples being the $500 million set aside by Spotify for acquisitions and the purchasing of Stuff media by iHeartMedia for $55 million. Entertainment personalities such as Trevor Noah and Will Ferrell have also caught on to its potential, extending their brand from film and TV into podcasting also. Small wonder that $479 million in advertising revenue was estimated in 2018, with over a billion forecast by 2021.

From an outside perspective the big money being poured into podcasting scream success for the future of the industry. However some creators are apprehensive of this commercial transition for practical and principled reasons. 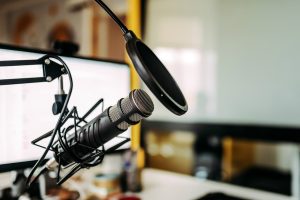 In a purely pragmatic sense the difficulties of raising interest of your podcast are much greater than they were 10 years ago. Attention can be drawn away from eager young upstarts as well-known personalities enter the fray, and independent creators promoting their show on podcasting apps can gain little traction with new listeners unless they are lucky enough to get a feature on the select recommendations lists.

A more virtuous concern claimed by some veteran podcasters is the lack of respect new arrivals have for the medium, using podcasting in a transient way as a stepping stone to more lucrative ventures rather than solely devoting themselves to establishing a quality show.

As credible as these issues are, there are others who have more positive expectations about the future of their industry.

Although indies currently face being pushed to the margins among the sudden influx of commercial money and interests, once the dust has settled these changes could benefit all podcasters big and small in the long run.

And regarding the contempt some reserve for podcasters who shift their attention elsewhere, others see this as a natural process typical to creative development across the cultural sector. Books are adapted into TV shows, plays are remade into films, and podcasts can become anything at all.

The podcasting boom has opened opportunities for creators in unexpected ways also. Dan Benjamin, founder of podcast network 5byb and keen computer programmer, built a custom content management system off the surge of shows that joined his network, handling business concerns for 30+ shows so hosts could focus on refining their product.